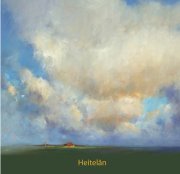 In November 2007 the new book entitled "Zoeken/Searching" was published, presenting photographs of paintings, portraits and landscapes from 2000 till 2007.

A gatefold has been added as an extra feature, showing in eight stages the creation of a painting.
Published by Atelier Boogaart

Price: € 25,- (€ 9,50 including forwarding charges)
You can order the book by email: info@dinieboogaart.nl

In April 2004 the book " Loft & Lân " was published by Dinie Boogaart.
With photographs of paintings of Frisian skies & landscapes.
Price : € 25,-( € 9,50 including forwarding charges)
You can order the book by email: info@dinieboogaart.nl 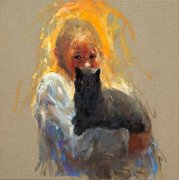 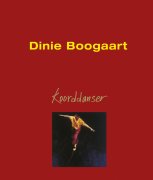 Intoduction by Dr. B. Ridderbos, Art Historian, University of Groningen The Netherlands.

A woman stands behind a fish-stall – massive, one hand on her hip, the other resting on the counter. Her red apron contrasts with her black blouse. A flowery headscarf has been wrapped around her head like a turban. The white background suggests a sweltering summer’s day. The woman looks slightly aside, somewhat distrustful almost, unapproachable, although she is quite obviously waiting for a buyer. Evasive and at the same time expectant, she is apparently thinking of matters that are clearly private.
In a different painting from the same series we see her again. This time, she is in action. Wide-eyed, she looks straight out of the picture. She is standing with her legs apart as if she has to brace herself under the weight of the big fish – one in each hand – that she is offering to a buyer, arms extended.
Here, she is wearing a dark turban, rising up high against a threatening backdrop, with colour variations ranging from broken white to purple and black, as if a thunderstorm is brewing. While the scene of the woman waiting by her stall in the sunlight is like a still with its almost contemplative character, the image of the woman offering her merchandise has something dramatic about it – giving the impression that it is not just about selling a few meaty fishes, but that is like a sacrifice in distant primeval times. Despite the differences, both figures have something in common. However monumental both come across, they are vulnerable at the same time – the waiting one because of the melancholy she radiates, the ‘sacrificing’ one because of her startled look.

An old man cautiously holds on to a lance. This, too, evokes thoughts of primeval times, but this time without any drama. This Old Warrior has completely withdrawn into his own mind. It is as if he is dreaming of a mythical past when he was still young and strong. In other paintings the same person only appears as a Silent Man. In one of them, he looks at us with an unfathomable look in his eyes. In two others, he hides his face behind one of his hands. In yet another painting he is facing in our direction, but he stoops and looks down, so there is absolutely no contact with anyone looking at the picture. It is almost as if we have to step aside to let him pass. The white surface on which his dark figure is outlined suggests emptiness rather than sunlight.

A woman in black against a black background, wearing a dark mask that leaves only the lower part of her face free. The flesh of the neck and of the lower arms, which are dangling parallel to her body, lights up in the dark tableau, giving her a clear physical presence, despite all concealed aspects. Is the woman a younger family member of the old warrior? Is her mask a war mask and does she want to attack us? The painting is called Empty-handed; so, in fact, she is defenceless. She is hiding, but presents herself as if she were nude. She threatens us, but does so with her sense of loss.

Colourful canvases of a child. Standing on a chair, it cheers and fills up the entire picture. Because of the radiating way in which it looks at us, the world outside the picture is drawn into its private celebration. On another canvas, however, the child shows almost a sense of being lost. With a look of amazement in its eyes, it stares ahead from under a big hat that is reminiscent of a Viking helmet, and that includes the child in the family of warriors to which the old man with the Lance and the woman with the mask also belong. Contrary to the cheering child that seems to want to share its joy with everything and everyone, this particular child seems to be aware of the distance between himself and the outside world. At the same time it expresses a subdued power with its bright colours that make it a sparkling and vital element within an indefinable space.

Defence, anticipation, fright, resignation, threat, desolation, joy and astonishment – all these emotions, sometimes several of them simultaneously, are expressed in the figures painted by Dinie Boogaart. They are not just emotions that accidentally belong to the depicted person – they represent essential aspects of human life. This very aspect gives Boogaart’s works an almost archetypal significance, which is further enhanced by the painter’s powerful and penetrating style. The compositions are often monumental because of their concentration on a single figure that fills the field of view or has been positioned in a relation of tension towards it.

The field of view often consists of no more than one or several colour areas. Sometimes, it is even kept unpainted. The three-dimensional effect is absent or of an undetermined character; only in rare instances are the figures elements of a realistic environment. Occasionally, however, the figure is almost enclosed by objects and coloured areas, like in one of the Silent Man pictures. The man’s loneliness is as tangible here as it is on the picture in which his dark silhouette is outlined against a bare surface.

The austerity and concentration of the compositions and the restricted use of space make the often intense use of colours all the more conspicuous. The classical oil painting technique makes the bright colours radiate and ensures that the dark ones are never dull. The coloration, which includes the use of whites and blacks, supplies the perfect means to Dinie Boogaart to express the emotions that posses her figures. In all this, she chooses to use large colour areas – sometimes primarily monochrome, but often strong light-dark contrasts in an interaction, or even a clash, of intense colours.

The use of colours cannot be disconnected from the painter’s hand that shows both great mastery and a great sense of freedom. Loose strokes and changing tones make the coloured areas come alive or shape a picture when used as individual elements. The painter’s hand is always instumental in the expression of the subject but, at the same time, it rises out and above it – the strokes and tones create a rhythm that, eventually, is experienced only as purely aesthetic joy.

This applies pre-eminently to the landscapes, the nudes and other model studies. The psychological and archetypal aspects play a less striking role in these classic subjects, to which painters have felt drawn throughout the ages. The formal challenges of these themes have resulted in pictures in which atmosphere and expression are incorporated in the joys of the art of painting.